This sale is for Shutterspeed (2000) starring Steve Borden on DVD.

4.2
Director: Mark SobelWriters: Carey W. Hayes, Chad HayesStars: Steve Borden, David Lovgren, Daisy FuentesSummary: Riley Davis and Cliff Davis are Seattle police detectives - Riley in narcotics, Cliff recently promoted into the detective ranks in homicide - and estranged brothers. The estrangement is due to a former case gone wrong that involved both and their police officer father. The brothers end up working together again on a case, that of murdered model Mark Pearson, the brother of Riley's fiancée, Kenzie Pearson, also a model who works for the same agency. Before Mark died, he mysteriously left for Riley a camera with only one shot taken on the roll of film in it. Riley, after developing the film, finds blurry, indistinguishable images on that photograph. He is certain that those images or the camera itself have something to do with the murder. The case takes on new dimensions when Kenzie is kidnapped. Cliff and the rest of the police force's prime goal is to determine the motive for the murder and thus catch the murderer, while Riley's is to get Kenzie back alive and safe. The process of ... Written by Huggo
Also known as: Shutterspeed (on a region-free DVD). 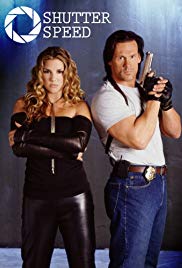