This sale is for Shooting High (1940) starring Jane Withers on DVD.

6.3
Director: Alfred E. GreenWriters: Lou Breslow, Owen FrancisStars: Jane Withers, Gene Autry, Marjorie WeaverSummary: Jane Pritchard sides with the Carsons in a generations-old feud which her family wages with the descendants of Wild Bill Carson, first United States Marshal of Carson Corners. Will Carson insists that a Pritchard killed his grandfather when the Marshal came into town on a marauding expedition led by The Hawk. Will maintains his grandfather had joined the gang to trap the leaders and a trigger-happy Pritchard had kept him from doing so. A crew from Signet Pictures comes to town to film the story of Wild Bill's life. Will is in love with Jane's sister, Marjorie but her banker-father opposes the match. Will and Marjorie argue, and she becomes infatuated with Bob Merritt, who is to co-star in the film with Evelyn Trent. Jane and Sheriff Clem Perkle get rid of Merritt by telling him the townspeople are going to ride him out of town on a rail. Movie director J. Wallace Rutledge agrees to let Will play the role of his grandfather. On the day a bank robbery scene is to be filmed at ... Written by Les Adams <[email protected]>
Also known as: Shooting High (on a region-free DVD). 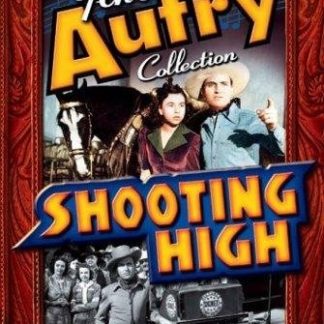