6.5
Director: Stacey TenenbaumWriters: Stacey TenenbaumStars: Don Ward, Kevin Tuchy, Jes MiddendorfSummary: The lives of a number of shoe shiners are presented, with a focus on a few working in La Paz, Bolivia, New York City, USA, Sarajevo, Bosnia-Herzegovina, Tokyo, Japan and Toronto, Canada. The individuals highlighted have different stories that got them into the work, and besides the job in and of itself, the common aspects between these shiners are the realization that general society views the work as being beneath them with many looking through them as people until they get to know them, and that they are all proud of doing the work with the exception of many of those in La Paz who wear a mask while working in understanding that being known as a shoe shiner could place limits on them in that general societal disdain. While there are some who do the work in purely a means to survive in difficult life situations, most chose this job either as an outcome of a personal current situation, as an alternative to what was a previous unsatisfying "other" work life, many in some sort of ... Written by Huggo
Also known as: Shiners (on a region-free DVD). 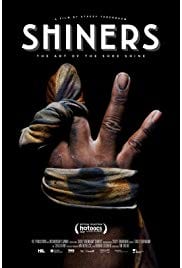