She Loved a Fireman (1937) starring Dick Foran on DVD


This sale is for She Loved a Fireman (1937) starring Dick Foran on DVD.

5.4
Director: John FarrowWriters: Carlton Sand, Morton GrantStars: Dick Foran, Ann Sheridan, Robert ArmstrongSummary: After his political days are over, Red decides to become a fireman. He takes the exam, goes to fire college and is stationed at Company 27. That station is commanded by Captain Shannon, who punched him out over his last girl and does not like him seeing his sister Margie. Red does just enough work to get by, but then his lack of attention causes his best friend Skillet to be injured. For his punishment, Red is suspended and then transferred to a fire boat. He works harder and finds that the fireman's lot is not as easy or as safe as he thought. Written by Tony Fontana <[email protected]>
Also known as: She Loved a Fireman (on a region-free DVD). 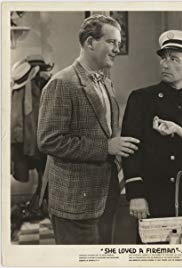