3.6
Director: Timothy BondWriters: H. Rider Haggard, Peter JobinStars: Ian Duncan, Ophélie Winter, Marie BäumerSummary: Leo Vincey receives a map from his late father, leading him to the legendary city of Kor in search of an explanation for his mysterious ancestry. He is accompanied by his girlfriend Roxanne. He discovers that he is the only descendant of an Egyptian priest who had been executed for the crime of falling in love with the Egyptian Princess. The ruling queen Ayesha, or rather She, is the same Egyptian Princess of centuries ago, her beauty and youth look being preserved by magic. She becomes convinced that Leo is the reincarnation of her former lover, and wants to kill him. Leo and Roxanne will have to fight against surprise attacks on them, but survival in that foreign land with strange customs, is difficult. Leo is terribly attracted to She's beauty, but at the same time he fears for her obscure spirit, and finally he must take a decision - to run away from her, or to love her and die. Written by Artemis-9
Also known as: She (on a region-free DVD). 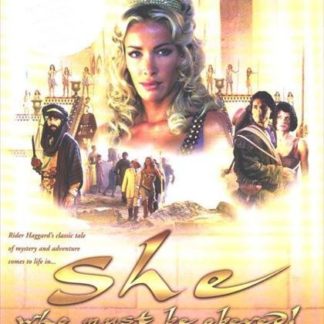