This sale is for Secret World (1969) starring Jacqueline Bisset on DVD.

5.9
Director: Paul Feyder, Robert FreemanWriters: Gérard Brach, Jacky GlassStars: Jacqueline Bisset, Jean-François Vlerick, Pierre ZimmerSummary: After a terrible car wreck in which he lay helpless under the body of his mother for hours, 11-year-old François is taken in by his uncle and strict aunt in their country house. He confusedly locks himself in a universe of loneliness and rather morbid reveries. But the arrival of a beautiful young Englishwoman, Wendy, incidentally a past lover of the uncle, suddenly changes the situation: an unexpected bond is established between the child and the young woman which will gradually tear this first off from his isolation and the latter in the grip of men who covet her. Written by Anonymous
Also known as: Secret World (on a region-free DVD). 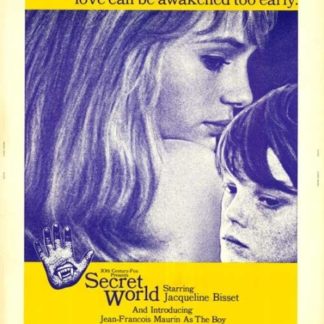