This sale is for Sea Devils (1953) starring Yvonne De Carlo on DVD.

5.7
Director: Raoul WalshWriters: Borden ChaseStars: Yvonne De Carlo, Rock Hudson, Maxwell ReedSummary: Gilliatt, a fisherman-turned-smuggler on the isle of Guernsey, agrees to transport a beautiful woman to the French coast in the year 1800. She tells him she hopes to rescue her brother from the guillotine. Gilliatt finds himself falling in love and so feels betrayed when he later learns this woman is a countess helping Napoleon plan an invasion of England. In reality, however, the "countess" is an English agent working to thwart this invasion. When Gilliatt finds this out, he returns to France to rescue the woman whose true purpose has been discovered by the French. Written by dinky-4 of Minneapolis
Also known as: Sea Devils (on a region-free DVD). 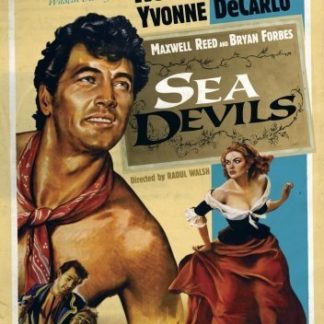