Say It with Flowers (1974) with English Subtitles on DVD


This sale is for Say It with Flowers (1974) with English Subtitles on DVD.

6.1
Director: Pierre GrimblatWriters: Roberto Bodegas, Christian CharrièreStars: Delphine Seyrig, John Moulder-Brown, Fernando ReySummary: The action begins in black and white, as in a memory. Klaus is a Nazi military who has just failed an attack on Hitler. Desperate, Klaus shoots his children and then shoots at his pregnant wife, which he leaves badly injured. Finally, he tries to commit suicide, but at the last moment he does not have enough courage to pull the trigger, and flees on a motorcycle, with which he has an accident - The action continues in France. Jean-Claude is a handsome young man complexed by a malformation he presents on his face. Jean-Claude lives with his parents, Jacques Bergé, an amnestic man, locked in himself and obsessed with Egyptian art, and Concepción, a woman also locked in herself and obsessed with the flowers in her garden, and that, it seems , suffers a paranoia. Jean-Claude's little brothers also live in the same house: Robert, a deaf and dumb boy, and twins Antoine and Raymond. The story, told by young Jean-Claude to a police commissioner, begins with the arrival of Ursula, a beautiful ... Written by Miguel Ángel Díaz González
Also known as: Say It with Flowers (on a region-free DVD). 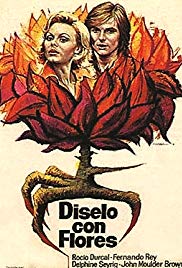