Satan at Play (1907) with English Subtitles on DVD


This sale is for Satan at Play (1907) with English Subtitles on DVD.

6.5
Director: Segundo de Chomón, Ferdinand ZeccaWriters: Segundo de ChomónStars: Julienne MathieuSummary: In a strange grotto deep in the bowels of the earth a coffin uprights itself, dances, then opens, and out steps a demonic magician with skeletal face, horns, and cape. He wraps two women (who appear to be in a trance) in fabric, levitates them, and causes them to burst into flames and disappear. As he gathers their ashes in a pitcher a Good Spirit [a young woman who resembles Peter Pan] appears, shakes her head No, and reveals the "souls" of the two women in a secret compartment deeper within the cave. The Good Spirit vanishes in a puff of smoke. The magician then produces 3 glass bottles on pillars, takes them downstage close to the camera, and reveals 3 tiny women in them; one woman beats a tambourine while the other two sway. The magician pours ashes (?) into the bottles, but the Good Spirit reappears and makes these trapped figures disappear in a flash, angering the magician, who chases her away. He makes an easel appear. There is an odd sort of screen on it bearing the Pathe ... Written by wmorrow59
Also known as: The Red Spectre (on a region-free DVD). 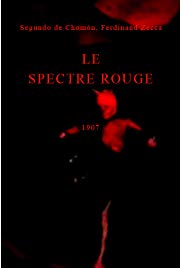