This sale is for Sanctimony (2000) starring Casper Van Dien on DVD.

2.6
Director: Uwe BollWriters: Uwe BollStars: Casper Van Dien, Michael Paré, Eric RobertsSummary: Tom Gerrick (Casper van Dein) is a Wall Street Whiz Kid. He's also a serial killer. Six victims have had their eyes cut out, six their ears cut off and three their tongues removed. By the time he gets to his fourth 'tongue' victim, Tom is getting sick of his success. He calls the police himself, claiming to have found the body of the sixteen year old girl on the street. He wants to get caught, but first he wants to play with his captors for a while. His initial sensitivity to the crime is soon replaced with a psycho-smirk and a high priced lawyer. By the time the police find out he is the killer he is on a shooting spree, first on live television during an interviews on "the secret of success", then at his ex-fiancés non-wedding party. Written by [email protected]
Also known as: Sanctimony (on a region-free DVD). 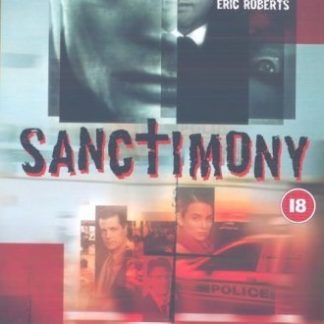