This sale is for Robin Hood: Prince of Sherwood (1994) starring Jason Braly on DVD.

4.4
Director: James HunterWriters: James HunterStars: Jason Braly, Steve Barker, Caroline DuncanSummary: Robin Hood is back with his gang of outlaws to do battle with the dark forces of the Sheriff of Nottingham. With his lands taken and father murdered, he and his gang of outlaws are forced to live in Sherwood forest and raid the Sheriff whenever needed. Not content with his life of crime, Robin Hood pleads with his men to overthrow the Sheriff once and for all. However, the Sheriff has plans of his own for Robin. In a stunning move, the Sheriff and his allies kidnap Lady Marian and hold her prisoner. In one last and desperate battle Robin Hood leads an assault upon Nottingham Castle to rescue his love, and bring balance back to England. Will the King return in time? Written by Anonymous
Also known as: Robin Hood: Prince of Sherwood (on a region-free DVD). 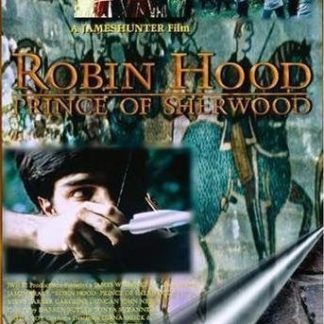