This sale is for Rain (1932) starring Joan Crawford on DVD.

6.9
Director: Lewis MilestoneWriters: John Colton, Clemence RandolphStars: Joan Crawford, Walter Huston, Fred HowardSummary: For residents on the idyllic South Seas island of Pago Pago, life is simple until a boat arrives carrying two couples, the Davidsons (who are missionaries), the MacPhails and a prostitute named Sadie Thompson. Davidson is more than just a religious zealot; he's a mad man. When the boat, which was en route to another port, is temporarily stranded on the island due to a possible Cholera outbreak on-board, Sadie spends her time "partying" with the American soldiers stationed on the island. Her behavior, however, is more than the Davidsons can stand and soon Mr. Davidson confronts Sadie about her evil ways and offers salvation. When Sadie rebels and the attempted redemption does not go as planned, Davidson arranges to have her sent back to San Francisco, where she fled some years ago due to mysterious personal issues. Davidson soon becomes unhinged and thus begins a series of surprising events which culminate in disaster. Written by Eva1-1
Also known as: Rain (on a region-free DVD). 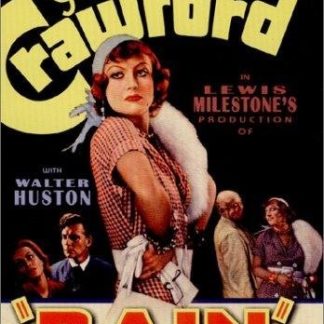