This sale is for Pyongyang nalpharam (2006) with English Subtitles on DVD.

6.4
Director: Phyo Kwang, Chil-min MaengWriters: Se-Hyeok Jo, Jeong-Seok KimStars: Ryeong-hun Ri, Yeong-Chun Chol, Cheon-Yeol KimSummary: "Taek" and "Kyon", children of the two Masters who founded the school of martial arts "Taek-kyon", must keep the school manual away from the hands of the Japanese occupiers (early 20th century) and entrust it to Priest "Jiham" according to the will of their fathers. The two lovers, who have not seen each other since childhood due to the travel of "Taek" to Seol, meet in the cave where the manual is hidden and plan to defend the manual until the last drop of blood. The students of the school, known as the "Pyongyang Nalpharam"(pronounced Nal-Pa-Rem)shall help them in this path, but the Japanese also want to seize the manual very badly; as they want to destroy it so that their school of "Judo" remains unrivaled in Asia. Written by Ehsan_Agha
Also known as: Pyongyang nalpharam (on a region-free DVD).
Source: imdb.com 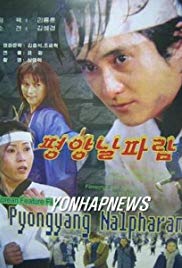