8.1
Director: Nicholas WilsonWriters: Digby Cook, Anne PickStars: Chris Bennet, Rodney Benson, Pierre-Yves BourduasSummary: Marc Emery, Canada's most prominent marijuana activist popularly known as the "Prince of Pot," faces extradition to the U.S. and a possible life sentence for selling marijuana seeds. ''Prince of Pot'' follows the controversial self-made leader of the marijuana movement as he attempts to raise an army of pot activists and lead them into battle against the U.S. Federal Government and their drug enforcement police, the D.E.A. Through Emery's unique life and career as a civil agitator -- from his beginnings in London, Ontario to his showdown with the U.S. Drug Czar in Vancouver and D.E.A. in Montreal -- the film examines deeper questions: Canadian sovereignty and police integration in a world dominated by its southern neighbor. Written by Nick Wilson
Also known as: Prince of Pot: The U.S. vs. Marc Emery (on a region-free DVD).
Source: imdb.com

Be the first to review “Prince of Pot: The U.S. vs. Marc Emery (2007) starring Chris Bennet on DVD” Cancel reply 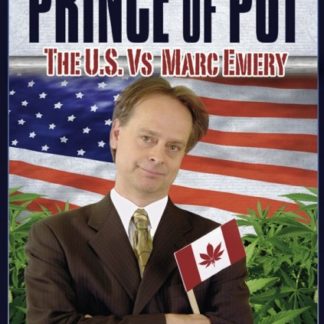