This sale is for Plymouth (1991) starring Cindy Pickett on DVD.

5.7
Director: Lee David ZlotoffWriters: Lee David ZlotoffStars: Cindy Pickett, Richard Hamilton, Perrey ReevesSummary: The inhabitants of the small town of Plymouth have to evacuate their homes. an Old community From Plymouth Oregon lead by Richard Hamilton character he plays named - Mayor Wendell Mackenzies [uncle of the town doctor as well] Replaced to a Lunar colony by a corporate conglomerate that cause an environmental radioactive waste accident at the damaged their old community at Oregon and the relationships of the community at hand on the new environment on the Moon. Collectively they move to a moon base. Despite the agreement that no babies should be born there, because of the risks involved, Dale Midkiff character he plays named- Lunar EVA Worker Gil Eaton[*1](b&s) both Cindy Pickett's character she plays named - Doctor Addy Mathewson M.D. the base's doctor does get pregnant. Her co-working Nurse on duty is Robin Frates.... Donna Doctor Addy Mathewson M.D. has her kids with her there too and they are her daughters Older one Perrey Reeves .... Hannah Mathewson, younger one Lindsay Price ....... Written by Kenneth W.F. Doucette <[email protected]>
Also known as: Plymouth (on a region-free DVD). 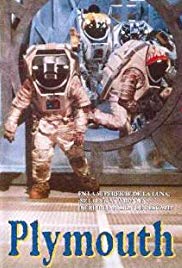