4.5
Director: Jonathan YudisWriters: Mike DavisStars: Malik Carter, Sean Andrews, TulaSummary: A word. What is the pervert? Sex freak, deranged degenerate, disturbed diabolical psychotic subversive embracer of things both erotic and erratic. What is to pervert? The twist of an object, phrase or ideal in such a way it was never intended or even imagined. Who is the pervert? Why, that's another story altogether... A young man comes to spend the summer at the remote desert ranch of his father in hopes of repairing their estranged relationship only to find that he's become a psychotic madman. But who is responsible for the bizarre murders James has uncovered? Hezekiah pins the blame on his son, and after a series of unexplainable incidents, James begins to doubt his own suspicions. Little does he know that the real killer lurks just under his nose! Written by Anonymous
Also known as: Pervert! (on a region-free DVD).

Be the first to review “Pervert! (2005) starring Malik Carter on DVD” Cancel reply 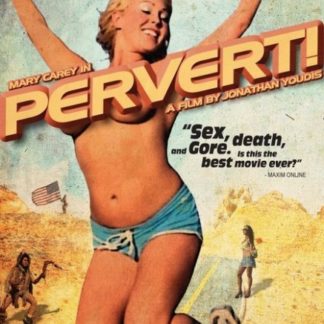