This sale is for Paris Model (1953) starring Marilyn Maxwell on DVD.

4.8
Director: Alfred E. GreenWriters: Robert SmithStars: Marilyn Maxwell, Paulette Goddard, Eva GaborSummary: The story of a dress and the effects it has on the women who wear it begs the question of where is O.Henry when he is needed. "Nude at Midnight", a new and daring Paris style creation is worn by Gogo Mantaine to try and ensnare the Rajah of Kim-Kepore but he is attracted to Lisa, the girl who modeled the dress. Marion Parmelee dons the gown to charm her husband's retiring (as in quitting) boss, Patrick James Sullivan, into letting her husband, Jack Parmelee take over the business, but the boss' wife Nora, who really runs the business, has other ideas. The same model dress is worn by Betty Barnes, in an effort to attract her boss, lawyer Edgar Blevins, who is married to a dowdy wife, Cora, but the wife turns up wearing the same dress. Marta Jensen uses the dress to inveigle her reluctant sweetheart, Charlie Johnson into a marriage proposal. Since she also attracts the Rajah, her options expand. Written by Les Adams <[email protected]>
Also known as: Paris Model (on a region-free DVD). 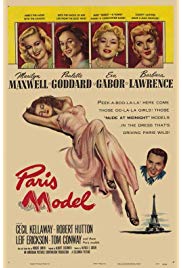