This sale is for Pacific Blackout (1941) starring Robert Preston on DVD.

7.2
Director: Ralph MurphyWriters: Franz Schulz, Curt SiodmakStars: Robert Preston, Martha O'Driscoll, Philip MerivaleSummary: While bombers roar overhead during a practice blackout in a large American West coast city, Robert Draper, is among the prisoners in a police van. The inventor of a new range finder for anti-aircraft guns, he has been sentenced to death for the murder of his co-worker, Tom Manton, on the perjured testimony of night club singer Marie Duval, despite character evidence given in his favor by John Ronnel. Draper escapes when the van is in an accident and seeks refuge in a park, where he runs into telephone operator Mary Jones who decides to help him. They go to a garage where they cut the chain holding Draper's wrists together, and then to a hotel where they register as brother and sister. Draper telephones Ronnel, sure he is the only man who can establish his innocence. Ronnel, however, anonymously, telephones the police and Draper and Mary barely escape. Draper, knowing that Marie has information that can clear him, goes to the club where she works and finds her murdered. Written by Les Adams <[email protected]>
Also known as: Pacific Blackout (on a region-free DVD). 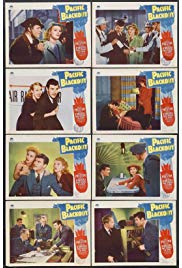