This sale is for Ostinato destino (1992) with English Subtitles on DVD.

4.7
Director: Gianfranco AlbanoWriters: Francesco Costa, Antonio NibbyStars: Monica Bellucci, Alessandro Gassmann, Angela FinocchiaroSummary: Carolina Rambaldi isn't fulfilled by her three children: Marcello, a lazy do-nothing, Lucrezia, a bossy type who produces a TV show, and Cesare, homosexual and malicious, who's a sociologist. When she writes her will, Carolina leaves her property to the one child who's married and had a child in the past year and a half. Cesare and Lucrezia are furious with her demands, since they're incapable of meeting them. Marcello, on the other hand, marries a dangerous killer called Marina. Marina gets pregnant right away but unfortunately has a miscarriage. She discovers that there's a clinic in Germany that specializes in embryo transplants for sterile women. She convinces her twin sister Angela to take her place while she flies to Germany to have the operation. But Cesare finds out about her plan and causes an explosion on the airplane Marina is travelling on. So Angela goes to Germany to have the transplant that Marina was scheduled for. Written by france
Also known as: Ostinato destino (on a region-free DVD). 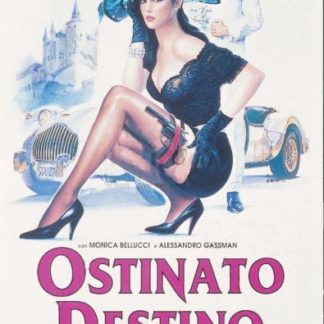