6.7
Director: Robin SpryWriters: Robin Spry, Peter PearsonStars: Len Cariou, Jayne Eastwood, Carol LazareSummary: Jason Brady is a hot crusading Montreal TV reporter who learns of the biggest story of his career. A female social worker shows him the carnage happening to children due to the criminally negligent behaviour of a corporation concerning their handling of a deadly chemical called B.A.P. As he investigates, he finds that not only does he have to face the corporation's underhanded efforts to silence him, but also the turmoil with his own family as he gets so emotionally involved in the story and the social worker that he is alienating his wife. Eventually, events lead to a point that forces him to make sacrifices he could not anticipate. Written by Kenneth Chisholm <[email protected]>
Also known as: One Man (on a region-free DVD). 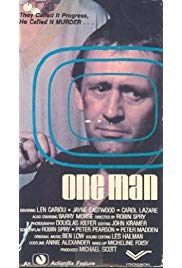