This sale is for One Dangerous Night (1943) starring Warren William on DVD.

6.5
Director: Michael GordonWriters: Arnold Lipp, Max NosseckStars: Warren William, Eric Blore, Marguerite ChapmanSummary: Michael Lanyard (Warren William), alias the Lone Wolf and his man Friday, Jamison (Eric Blore), pick up Eve Andrews ('Marguerite Chapman')), when her car is wrecked. At her place, they discover the body of wealthy playboy Harry Cooper (Gerald Mohr) and are arrested. Inspector Crane (Thurston Hall), who doesn't believe the Lone Wolf has reformed, discovers jewels are missing. Lanyard and Jamison escape. Lanyard learns Cooper was blackmailing Eve, Sonia Budenney (Tala Birell), wife of a famous physician, and Jane Merrick (Mona Barrie), famous actress. He is spotted by gossip columnist Sidney Shaw (Warren Ashe), who agrees not to turn him in if he can tag along. Lanyard learns that Cooper planned to meet a woman at the airport. Hurrying there, he spots the girl and has Jamison trail her. Later, as he is questioning the girl, Patricia (Margaret Hayes), she is shot and wounded. After being turned in twice by Shaw and escaping , despite his promise not to do so, Lanyard and Jamison return ... Written by Les Adams <[email protected]>
Also known as: One Dangerous Night (on a region-free DVD). 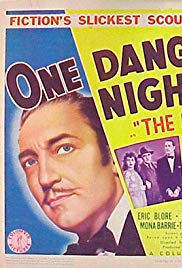