This sale is for Never Apologize (2007) starring Malcolm McDowell on DVD.

7.9
Director: Mike KaplanStars: Malcolm McDowell, Lindsay Anderson, Alan BatesSummary: Lindsay Anderson ("This Sporting Life," "O Lucky Man!") was an award-winning director, critic, essayist and anarchist. Anderson met future Golden Globe-nominee Malcolm McDowell ("A Clockwork Orange," "The Book of Eli") when he cast him in his first starring role as the rebellious Mick Travis in the movie "If...." Their working relationship and deep friendship would span several decades, and "Never Apologize" is McDowell's celebration of his friend and mentor, the time they spent working together, and the famous circle of people with whom they were surrounded. Combining McDowell's own memories with pieces written by and about Anderson, and with his often hilarious and moving impressions of Anderson and their circle -- including Bette Davis, John Ford, John Gielgud, Lillian Gish, Richard Harris and Laurence Olivier -- McDowell offers a glimpse of the cultural, social and political climate of the period. Written by Anonymous
Also known as: Never Apologize (on a region-free DVD). 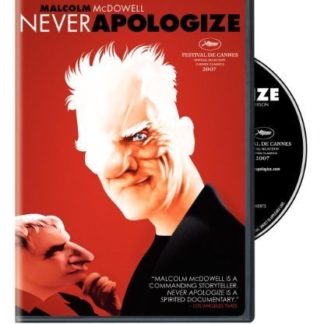