Nagina (1986) with English Subtitles on DVD


This sale is for Nagina (1986) with English Subtitles on DVD.

6.5
Director: Harmesh MalhotraWriters: Jagmohan Kapoor, Ravi KapoorStars: Sridevi, Rishi Kapoor, Amrish PuriSummary: Rajiv comes from a very wealthy family, and lives in a palatial home with his mother, who would like him to get married to a beautiful young woman named Vijaya Singh, the only daughter of Thakur Ajay Singh. But Rajiv is in love with a woman named Rajni, who is an orphan and has no family background. When Rajiv mentions this to his mother, she opposes this marriage, but relents when she meets with Rajni and sees that she is a indeed a beautiful woman. Both get married and live harmoniously for quite some time - until the arrival of Bhairo Nnath a religious man, who is capable of controlling snakes. He informs Rajiv's mom that the woman, Rajni, is a shape-shifting venomous snake who has married Rajiv to avenge the death of her spouse years ago when Rajiv was a child. What Rajiv's mom does not know that Bhairavnath has a secret agenda in entrapping Rajni, a secret - the knowledge of which will shatter and change their lives forever. This movie to be followed by a sequel called "Nigahen: ... Written by rAjOo ([email protected])
Also known as: Nagina (on a region-free DVD). 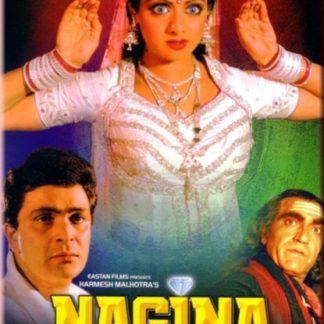