This sale is for Mystery in Dracula’s Castle (1973) starring Clu Gulager on DVD.

6.6
Director: Robert TottenWriters: Sue MilburnStars: Clu Gulager, Mariette Hartley, Johnny WhitakerSummary: Single mother Marsha Booth is a book writer with a deadline . . . and two rambunctious young sons. The boys are not happy at the thought of spending the summer at their rented seaside cottage because it means leaving their best friend, Morgan, in the city for a sleepy little beach town where nothing ever happens. Alfie, the eldest, is a budding filmmaker who decides to make use of the local lighthouse as "Dracula's Castle" with little brother Leonard in the lead role. They are accompanied by their babysitter, teenager Jean (who is the sheriff's daughter) and their new sidekick, a mutt named "Watson". But, unbeknownst to them, two local thieves Keith and Noah are hiding the prized Daumier diamond necklace that they stole in the lighthouse (it is valued at $100,000!) and don't fancy a group of nosy kids hanging around. Will Alfie & Co. find themselves in over their heads and will the truth really be found in the celluloid?
Also known as: Mystery in Dracula's Castle (on a region-free DVD). 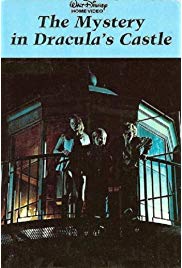