My Dear Nephews (1974) with English Subtitles on DVD


This sale is for My Dear Nephews (1974) with English Subtitles on DVD.

6.0
Director: Franco RossettiStars: Adriana Asti, Marc Porel, Gianluigi ChirizziSummary: 1936. In a village in the Bassa Padana, a beautiful and shapely forty-year-old girl is aunt of some boys in the middle of their sexual maturity, not indifferent to her charm. In Italy the fascist regime reigns, whose propaganda successfully recalls young people for voluntary enlistment for the colonial war in Abyssinia. The woman fearing for their lives, resorts to the weapon of seduction to divert them to their wicked choice but the young, now satisfied their urges, do not resist the new campaign for Italian intervention in the Spanish Civil War. Seeing them leave with the train will try in vain to dissuade them with a pathetic striptease at the station.
Also known as: My Dear Nephews (on a region-free DVD). 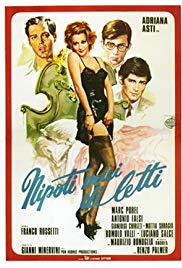