This sale is for My 5 Wives (2000) starring Rodney Dangerfield on DVD.

4.7
Director: Sidney J. FurieWriters: Rodney Dangerfield, Harry BasilStars: Rodney Dangerfield, Andrew Dice Clay, John BynerSummary: Monte Peterson, a rich real-estate developer, is going through his third divorce. His friend Ray has found a good site for a ski resort in Utah, and Monte comes to bid on the land, competing with local banker Preston Gates. Monte knew that, in order to take possession of the land, he would have to convert to the local religion, a sort of cross between Mormonism and Amish (no smoking, no drinking, bigamy and simple living/dressing encouraged). What he didn't know was that the deed to the land also included the three wives of the deceased former owner. He also buys another plot, and the two wives that come with it, in part because they are much better cooks. Gates, meanwhile, wants the land to build an Indian casino, and is mixed up with some mobsters. There's a trip to Las Vegas, a female-empowerment seminar, a jailbreak, and other complications too absurd to mention. Written by Jon Reeves <[email protected]>
Also known as: My 5 Wives (on a region-free DVD). 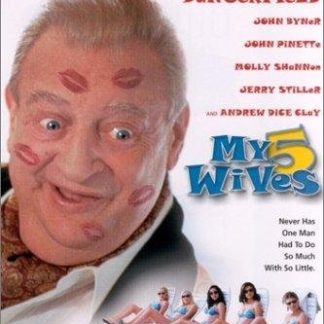