This sale is for Murder Without Tears (1953) starring Craig Stevens on DVD.

5.9
Director: William BeaudineWriters: Jo Pagano, William RaynorStars: Craig Stevens, Joyce Holden, Richard BenedictSummary: A husband hires a killer to murder his wife, then arranges for it to look like he committed the crime. At his trial, he presents irrefutable evidence that he could not have committed the crime - which, of course, he didn't - and is acquitted, thereby assuring that he can't be tried again for the murder. A police detective, however, is convinced that the man was responsible for the wife's murder, and sets out to prove it. Written by [email protected]
Also known as: Murder Without Tears (on a region-free DVD).
Source: imdb.com 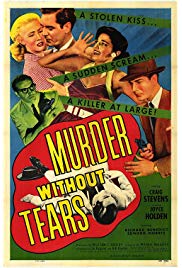