Murder Me, Murder You (1983) starring Stacy Keach on DVD


This sale is for Murder Me, Murder You (1983) starring Stacy Keach on DVD.

7.1
Director: Gary NelsonWriters: Mickey Spillane, Bill StrattonStars: Stacy Keach, Tanya Roberts, Don StroudSummary: Hammer is called before a Grand Jury by the only girl he ever proposed to, Chris Jameson. She wants him to protect her as she is to testify in a case against the Vance Helicopter Company for selling secrets to countries on the banned list. Chris also tells Hammer that he has a daughter, Michelle. When Chris is murder in the Grand Jury room Hammer is determined to find her killers and his daughter. There is a twist when Jack Vance tries to hire Hammer, and another one when he finds out his daughter appears to have been a porn star. However, his daughter has disappeared. There are more twists and turns before Hammer brings the case to a conclusion. Written by jem
Also known as: Murder Me, Murder You (on a region-free DVD).

Be the first to review “Murder Me, Murder You (1983) starring Stacy Keach on DVD” Cancel reply 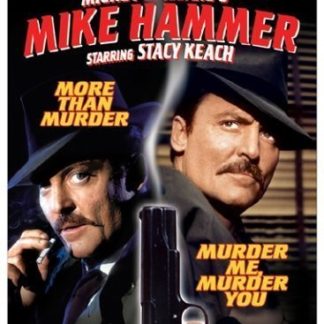