This sale is for Montana Incident (1952) starring Whip Wilson on DVD.

6.5
Director: Lewis D. CollinsWriters: Daniel B. UllmanStars: Whip Wilson, Rand Brooks, Noel NeillSummary: Whip Wilson (Whip Wilson) and his friend Dave Connors (Rand Brooks) survey the range for a railroad line, and are ordered to get out of the territory. The entire town and most of the land around it are owned by retired cattleman Martin (Hugh Prosser), who allows his oldest daughter, Clara (Peggy Stewart), who, unknown to Martin, has been milking the town dry with the aid of her fiancee (Bruce Edwards), over the objections of her sister Frances (Noel Neill.) Clara knows that the coming of the railroad will bring an end to her rule of the territory. Written by Les Adams <[email protected]>
Also known as: Montana Incident (on a region-free DVD). 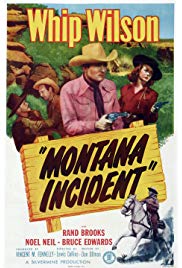