7.2
Director: René AllioWriters: Michel Foucault, Pascal BonitzerStars: Claude Hébert, Jacqueline Millière, Joseph LeportierSummary: Based on documents compiled by leading French philosopher Michel Foucault, this unique and original film charts the gruesome events which took place in a Normandy village in 1835, when a young man, Pierre Rivière, murdered his mother, sister and brother before fleeing to the countryside. With a cast made up of real-life villagers from the area where the events took place, the detailed re-enactments and careful attention to the gestures of their ancestors serve to create an intense and sometimes disturbing atmosphere of hyper-realism. Details of the crime and of the trial that followed are told from varied perspectives, including the written confession of Pierre himself, and form a rich and complex narrative that interrogates the concepts of "truth" and "history".
Also known as: Moi, Pierre Rivière, ayant égorgé ma mère, ma soeur et mon frère... (on a region-free DVD). 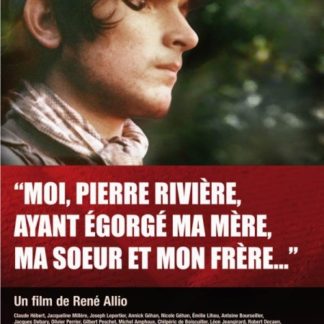