Middle of the Night (1959) starring Kim Novak on DVD


This sale is for Middle of the Night (1959) starring Kim Novak on DVD.

7.2
Director: Delbert MannWriters: Paddy ChayefskyStars: Kim Novak, Glenda Farrell, Jan NorrisSummary: Fifty-six year old Jerry Kingsley, the co-owner/co-operator of Lock Lee Fashions, a New York based garment manufacturer and wholesaler, has been widowed for two years. His older spinster sister, Evelyn Kingsley, moved in with him in his apartment following Jerry's wife's passing to take care of him, she who has always assumed the role as family caregiver. One of Jerry's married daughters, twenty-five year old Lillian Englander, believes Evelyn has a neurotic fixation on Jerry, Lillian unaware that her own fixation on her father is just as strong. Evelyn tries to arrange dates for Jerry, primarily with lonely widows, something he resists in wanting to find a woman on his own despite his own loneliness. Unlike his married business partner, fifty-nine year old Walter Lockman, who is always chasing after "tootsies" and "floozies", Jerry wants someone to love. After learning her story, Jerry thinks he's found the woman in Lock Lee's twenty-four year old receptionist, Betty Preisser. Betty,... Written by Huggo
Also known as: Middle of the Night (on a region-free DVD). 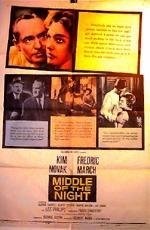