This sale is for Max Headroom (1985) starring Matt Frewer on DVD.

7.2
Director: Annabel Jankel, Rocky MortonWriters: Steve Roberts, George StoneStars: Matt Frewer, Nickolas Grace, Hilary TindallSummary: In the post-apocalyptic future where television sets are more important than food, TV ratings are the all important currency of the nation. A new technique of preventing viewers from channel surfing proves somewhat detrimental to particularly sedentary couch potatoes. The top studio becomes concerned: dead viewers make for low ratings. Edison Carter, top news reporter, is sent to find out more. After a motorcycle accident, his mind is preserved by wizz-kid Bryce and becomes his wise cracking, computer generated alter-ego: Max Headroom, who manages to boost ratings above those of any live hosts to date. This made for TV movie was later remade (sanitized version) as the first episode of the series. Written by Sven Kahrkling <[email protected]>
Also known as: Max Headroom (on a region-free DVD). 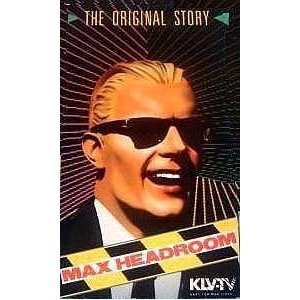