Man with a Gun (1995) starring Michael Madsen on DVD


This sale is for Man with a Gun (1995) starring Michael Madsen on DVD.

4.8
Director: David WylesWriters: Hugh C. Rae, Laurie Finstad-KnizhnikStars: Michael Madsen, Jennifer Tilly, Gary BuseySummary: Take a walk on the dark side with hired gun John Hardin. When Hardin's boss, powerful mobster Jack Rushton puts a contract out on his scheming and sexy wife Rena, Hardin confronts an assassin's worst fear-having to kill his own lover. Rena is counting on having Hardin kill her twin sister instead, but she didn't count on Hardin having a conscience. And when he refuses to murder an innocent woman, he finds himself trapped between lust and loyalty in a deadly game of blackmail, betrayal and brutality. Written by Echo Bridge Home Entertainment 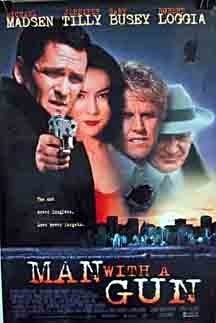