This sale is for Madame Du Barry (1934) starring Dolores del Rio on DVD.

6.4
Director: William DieterleWriters: Edward ChodorovStars: Dolores del Rio, Reginald Owen, Victor JorySummary: Madame DuBarry is a 1934 American historical film directed by William Dieterle and starring Dolores del Rio, Reginald Owen, Victor Jory and Osgood Perkins. The film portrays the life of Madame Du Barry, the last mistress of King Louis XV of France.[1] While this film does not serve accuracy to Madame Du Barry, it does feature antiques and jewelry that came from the actual days when Madame Du Barry lived. This film was released just as the Hays Code was taking full swing, and faced many problems with censors of the time. Scenes of this film had to be removed before its release or else it would have not been approved for release.
Also known as: Madame Du Barry (on a region-free DVD). 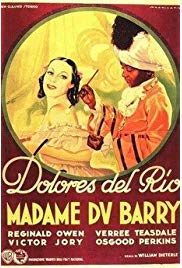