This sale is for Looking for Love (1964) starring Connie Francis on DVD.

5.7
Director: Don WeisWriters: Ruth Brooks FlippenStars: Connie Francis, Jim Hutton, Susan OliverSummary: After being in Hollywood for a month with lots of compliments but no offers, girl next door Libby Caruso decides to give up on having a singing career and focus on what she believes is her destiny: to be a wife, hopefully to a doctor. To nab a husband, she believes she has to get a job where many eligible bachelors would notice her, that job despite she having no skills besides singing. Away from her job as a Girl Friday at a brokerage firm, Libby, upon seeing him, believes she is destined to marry Paul Davis, who works at the product development company where Libby's best friend and roommate Jan McNair works, and who believes he is God's gift to the world, if only anyone would notice. Jan knows that Libby isn't Paul's type, he who didn't even notice her. However, who may be Libby's type, but who she in turn didn't really notice is Cuz Rickover, part-time supermarket stock-boy and part-time bass player among some other part-time activities. Ultimately, Paul believes he can help Libby ... Written by Huggo
Also known as: Looking for Love (on a region-free DVD). 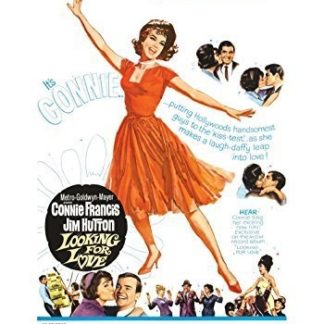