This sale is for Ling huan xiao jie (1988) with English Subtitles on DVD.

4.5
Director: Hark-On FungWriters: Chi-Ming PangStars: Bo-Bo Fung, Billy Lau, Norman ChuSummary: When a woman suspects her actor-husband, Chui Wai-Keung, has been fooling around with actress Jenny, she commits suicide. Afterward, her vengeful ghost appears and haunts Chui and his fellow actors, promising death upon Chui and Jenny. As a result, the actors seek the help of stagehand Uncle Fok, who practices Taoist magic, to vanquish the ghost. However, the ghost's jealousy and hunger for revenge may seem too powerful for any Taoist to capture. Written by Oliver Chu
Also known as: Ling huan xiao jie (on a region-free DVD). 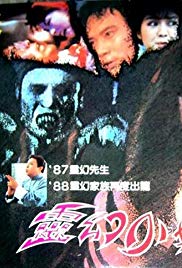