Life on the Mississippi (1980) starring Robert Lansing on DVD


This sale is for Life on the Mississippi (1980) starring Robert Lansing on DVD.

8.1
Director: Peter H. HuntWriters: Mark Twain, Philip H. Reisman Jr.Stars: Robert Lansing, David Knell, James KeaneSummary: Most mid-19th-century Mississippi River boys dreamed of occupying that pinnacle of power and glamour, the pilot house of a riverboat. In a riot of local color, this film tells how, unlike many, Sam's dream comes true. A callow teenager, he talks the tough but consummate Horace Bixby into making him his apprentice on the "Paul Jones," eventually following him to the much finer "Aleck Scott." Meanwhile, he is already spinning fantastic yarns to everyone from awe-struck lads ashore, to fellow "cub pilots", to young lady passengers who catch his eye. Things temporarily take a turn for the worse when Bixby must attend a meeting and leave Sam to work under Brown, a dour tyrant with a grudge against him. Written by Paul Emmons <[email protected]>
Also known as: "Great Performances" Life on the Mississippi (on a region-free DVD). 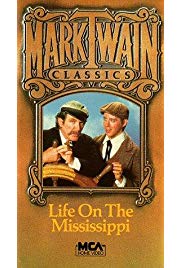