This sale is for Le dernier tournant (1939) with English Subtitles on DVD.

6.8
Director: Pierre ChenalWriters: James M. Cain, Sabine BerritzStars: Fernand Gravey, Michel Simon, Marcel ValléeSummary: Frank, a hobo, ends up in a garage-truck stop in the middle of nowhere. Nick Marino, its older, kind and naive owner, is married to Cora, a sexy and mercenary woman half his age. Frank, although not a fan of hard work, accepts Nick's offer to work for him. Of course, it is not for Nick's sake that the young man becomes his attendant, but for the love of Cora under whose spell he has fallen at once. It does not take long before Cora, who despises her husband, asks her lover to help her get rid of him. Frank is reluctant at first but. Written by Guy Bellinger
Also known as: The Last Turning (on a region-free DVD). 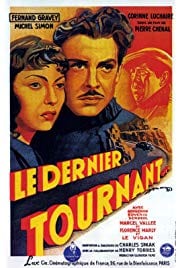