This sale is for Kilink uçan adama karsi (1967) with English Subtitles on DVD.

5.5
Director: Yilmaz AtadenizWriters: Çetin InançStars: Irfan Atasoy, Pervin Par, Muzaffer TemaSummary: The first sequel to KILINK ISTANBUL'DA picks up right where the 1st installment left off. Superman manages to locate Kilink's hideout on a remote island where his fiancee and her father are being held behind bars. Meanwhile, Kilink's scientists finally manufacture a destructive cannon-like weapon that is able to blast away even portions of mountains. Superman arrives there not flying but as an ordinary man and after becoming a target for the weapon is captured and locked up with his girlfriend and his future dad-in-law. Of course, Superman triumphs but, fortunately, Kilink gets away. The film ends with a separate episode that has nothing to do with the island and the weapon. This time Kilink murders a rich foreign woman and steals her jewels. But Superman is still around for the final conflict. Sadly, the part with this conflict was destroyed decades ago. At least, the producers saved many stills from this segment and incorporated them in the film together with a narration on the ... Written by [email protected]
Also known as: Kilink uçan adama karsi (on a region-free DVD). 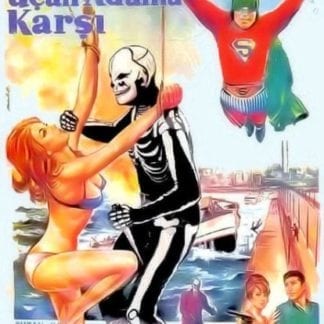