This sale is for Kamen Rider X (1974–) the Movie Five Riders vs King Dark with English Subtitles on DVD.

6.1
Writers: Shotaro IshinomoriStars: Ryô Hayami, Akiji Kobayashi, Naoko MiyamaSummary: From the dark corners of the world comes another fanitical terrisom group, this time it's the Government of Darkness, aka G.O.D. Daisuke Jin is transformed into the next generation cyborg, the Kai-Zorg with the help of his father. He was given the name Kamen Rider X. King Dark, leader of G.O.D, didn't count on Kamen Rider X coming to ruin his plans of pillaging, rape, and destruction of Earth. Armed with riddle stick, and ridel whip, Kamen Rider X kicked everyone's butt, who stood in his way. Every G.O.D. cyborg from Neptune to Chronos, fell before the might of X. But his toughest opponent was Apollogeist. Their battle lasted 13 episodes. Seeing how useless and unworthy his Cyborgs were against Kamen Rider X, King Dark began to create new soldiers,combining animals, like Starfish-Hitler, and Spider-Napolean. In the last episode, X finds out that King Dark was created by Dr. Jinau, a friend of his father's, but now his brain resides within King dark. Written by Hongou
Also known as: Kamen Rider X (on a region-free DVD). 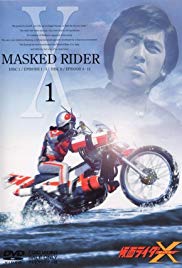