5.5
Director: Louis de WittWriters: Tonie van der MerweStars: Ken Gampu, Joe Lopez, Abigail KubekaSummary: When local soccer team The Eagles fall prey to a series of onslaughts from a mysterious gangster only a week before the championship final, the team turns to the one man that can help save their chances at victory - Joe Bullet (Ken Gampu). Joe will have to battle against villainous henchmen, escape booby-trap bombs and bring his martial arts expertise to the fore in order to survive an attack from a deadly assassin. In the end he will have to infiltrate the mysterious gangster's hide-out in a dangerous cat-and-mouse rescue mission to save not only The Eagles' two kidnapped star players, but that of his beautiful love interest, Beauty (Abigail Kubeka). The odds will be stacked against him, but he's the man that fights crime, the man that no one can tie down! Joe Bullet! Written by Darron Meyer
Also known as: Joe Bullet (on a region-free DVD).
Source: imdb.com 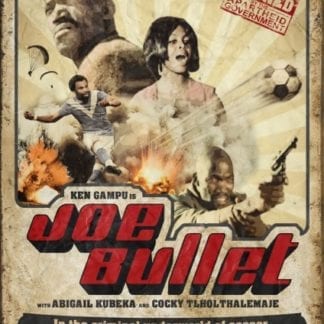