This sale is for Jacob Two Two Meets the Hooded Fang (1999) starring Gary Busey on DVD.

4.0
Director: George BloomfieldWriters: Tim Burns, Mordecai RichlerStars: Gary Busey, Mark McKinney, Miranda RichardsonSummary: One day, a boy named Jacob Two-Two (aptly named because every phrase that he utters is repeated) decides to set out to prove himself to his parents that he can do things, so his father, who is tired of hearing his wife order him to do the shopping, sets Jacob out to buy two tomatoes. As Jacob makes his way to buy them, the greengrocer in the shop keeps telling an officer that Jacob was threatening him, so Jacob escapes, but only just, hitting his head rather hard and awaking in court where he is sentenced to two years, two months, two weeks, two days, two hours, two minutes, and five seconds to a children's prison run by not only a mad wrestler presumed lost, but also two (also aptly named) bird-like and fish-like cohorts as well as slimy humanoids that spray resisters with slime to stop them in their tracks. Helping Jacob in his mission are two young agents that aim to free all of the children kept prisoner in the swampy penitentiary. It is up to Jacob Two-Two to escape this heinous ... Written by Theshapeshifter
Also known as: Jacob Two Two Meets the Hooded Fang (on a region-free DVD). 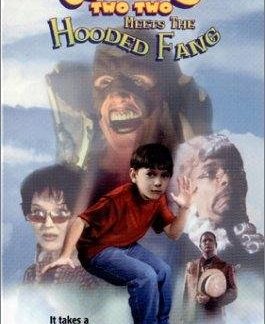