This sale is for Il vizio di famiglia (1975) with English Subtitles on DVD.

5.5
Director: Mariano LaurentiWriters: Gianfranco Couyoumdjian, Cesare FrugoniStars: Edwige Fenech, Renzo Montagnani, Juliette MaynielSummary: Giosuè, a noble industrialist of the spaghetti of the Venetian province is about to die and his sister, Magda his wife, Ines and daughter, Suzie- the result of an old flirtation of twenty years before trying to grab the huge inheritance triggering a war made exclusively of low blows. In this scenario, a former prisoner, Giacomo arrives at the villa as a waiter, who in reality has been hired by the count's sister to compromise and in fact remove rival wife. To succeed, the new servant must even pretend to be gay, but once his true attitudes are discovered, all the women of the house will try to take him to their side by trying him with their graces. After the death of the noble, a final twist will make the hierarchies within the house clear.
Also known as: Il vizio di famiglia (on a region-free DVD). 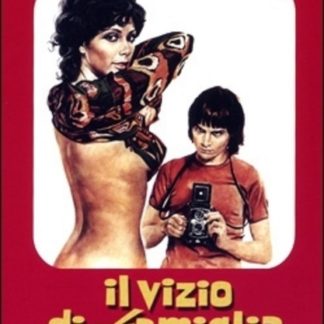