I Was Framed (1942) starring Tod Andrews on DVD

5.5
Director: D. Ross LedermanWriters: Jerome Odlum, Robert E. KentStars: Tod Andrews, Julie Bishop, Regis ToomeySummary: A newspaperman out to get the goods on a crooked politician winds up in jail, framed for a killing he didn't commit. He and another prisoner attempt an escape, but although the newspaperman gets away, his colleague is caught and returned to jail. Years later, the convict gets out of prison and winds up in the same town where his former cell-mate is now a respected citizen, and attempts to blackmail him. Written by [email protected] 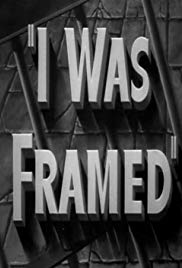