I Was a Shoplifter (1950) starring Scott Brady on DVD


This sale is for I Was a Shoplifter (1950) starring Scott Brady on DVD.

6.3
Director: Charles LamontWriters: Irwin GielgudStars: Scott Brady, Mona Freeman, Andrea KingSummary: Police detective sergeant Jeff Andrews is working on a case involving a gang of shoplifters, and he allows himself to falsely arrested as a petty thief, in order to make contact with the gang. Meanwhile, Faye Burton, a petty shoplifter and the daughter of a prominent judge, is blackmailed by the gang into joining them on the promise that they will get back a confession signed when she was caught by a department store detective, who had her sign the document rather than calling the police. It takes Jeff and Faye a lot longer to figure out who is the 'brains' behind the shoplifting gang than it does the audience, and the audience has less information than they do. Written by Les Adams <[email protected]>
Also known as: I Was a Shoplifter (on a region-free DVD). 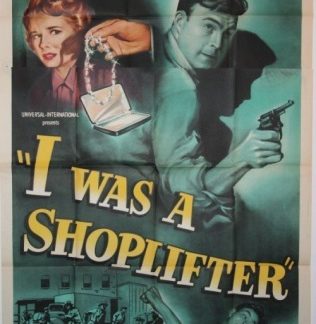