This sale is for Holy Flying Circus (2011) starring Ben Crispin on DVD.

7.1
Director: Owen HarrisWriters: Tony RocheStars: Ben Crispin, Steve Punt, Charles EdwardsSummary: In 1979 the Monty Python comedy team return from making their film 'Monty Python's Life of Brian' in Tunisia. Premiered in America the film is pilloried by ultra-right religious groups for its depiction of Christ. In England the Popular Peoples' Church of St Sophia (whose members include a Tourette's sufferer who shouts out swear words) find a copy of the script in a dustbin and lobby the British censor for its suppression, leading to many local councils banning its screening. Death threats follow and Michael Palin - "the nicest man in Britain" - has his effigy burned on his front lawn. Finally crazed TV programmer Alan Dick persuades Palin and co-star John Cleese to defend the picture on a late night chat show against the Bishop of Southwark and religious commentator Malcolm Muggeridge. Thanks to Cleese's reasoning the Pythons are seen to triumph, winning over the Popular Peoples' Church. A later encounter with God will show how the film's controversy paved the way for other artistic... Written by don @ minifie-1
Also known as: Holy Flying Circus (on a region-free DVD). 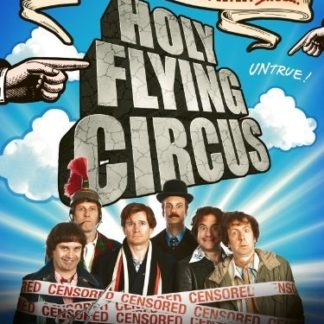