This sale is for Heavy Traffic (1973) with English Subtitles on DVD.

Director: Ralph BakshiWriters: Ralph BakshiStars: Joseph Kaufmann, Beverly Hope Atkinson, Frank DeKovaSummary: An animated feature which begins, ends and occasionally combines with, live-action filmed on location. A white dropout struggles to create comics and animated films, drawing inspiration from the harsh, gritty world around him. Still sharing his run-down apartment with his middle-aged parents, an oafish slob of an Italian father and a ditzy nut-case of a Jewish mother, he is ridiculed and looked down upon by his friends, hypocrites who run with violent gangs and the Italian Mafia, and a shallow Black girl who makes her living downtown with the pimps and pushers. This cartoonist gets a chance to pitch a film idea to a movie mogul, but the story proves too outrageous: a far-future Earth, destroyed by war and pollution, where a mutant antihero challenges and kills God. Complications ensue when the cartoonist's parents react in irrational ways to his various involvements. Written by orb 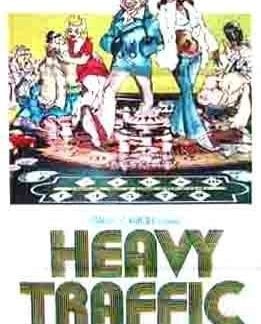