This sale is for Heavy Metal Picnic (2010) starring Tito Cantero on DVD.

Director: Jeff KrulikStars: Tito Cantero, Rudy Childs, Billy GordonSummary: The film focuses on the 1985 Full Moon Jamboree, a weekend field party bacchanal that took place at "The Farm," home to a cast of colorful characters who lived and partied alongside unamused neighbors in the McMansions of Potomac. The Full Moon Jamboree, an affair so raucous that it made the evening news, was the farm party to end al farm parties, and much of it was recorded using a home video camera and a stolen CBS News microphone swiped from the Reagan Inauguration earlier that year. Twenty-five years later, we revisit the scene and meet the people behind the party, as well as the musicians who performed there, including mid-Atlantic doom metal icons Asylum. Written by Jeff Krulik
Also known as: Heavy Metal Picnic (on a region-free DVD). 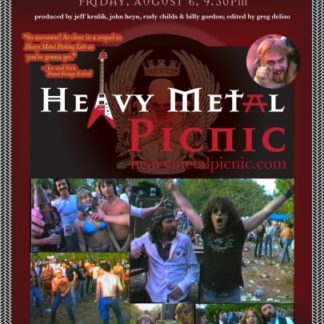