Head Against the Wall (1959) with English Subtitles on DVD


This sale is for Head Against the Wall (1959) with English Subtitles on DVD.

7.0
Director: Georges FranjuWriters: Hervé Bazin, Jean-Pierre MockyStars: Pierre Brasseur, Paul Meurisse, Jean-Pierre MockySummary: In order to get rid of his troublesome son François, Maître Gérane manages to have him committed to a mental hospital owned by Dr. Varmont, a supporter of traditional treatments, in constant conflict with Dr. Emery, whose therapy takes the psychology of patients into account. François soon makes friends with Heurtevent, a sweet epileptic, and both decide to escape from the place. Their attempt is a failure and Heurtevent, unable to get over what he considers a return to hell, commits suicide. But rebellious François tries again and this time around he is successful. He finds shelter at his friend Stephanie's home... Written by Guy Bellinger
Also known as: Head Against the Wall (on a region-free DVD). 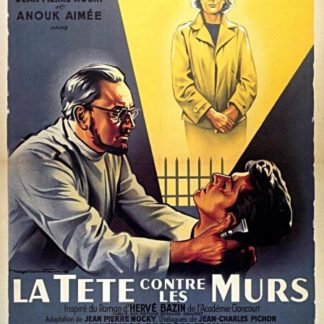