This sale is for Harvey Middleman, Fireman (1965) starring Eugene Troobnick on DVD.

5.5
Director: Ernest PintoffWriters: Ernest PintoffStars: Eugene Troobnick, Hermione Gingold, Patricia HartySummary: Harvey Middleman (Eugene Troobnick), a New York City fireman, lives happily in a New Jersey suburb with his wife (Arlene Golonka) and two small children. Harvey loves his life but after a fight with his wife over dinner one night he imagines himself rescuing a beautiful young girl from a fire. Just as he dreamed it he rescues a young model named Lois (Patricia Harty). Harvey steals a kiss from her as he resuscitates her and the two quickly fall in love. After secretly dating her several times, Harvey decides he must solve his moral dilemma by consulting his psychiatrist Mrs. Koogleman (Hermione Gingold). Mrs. Koogleman however is too preoccupied with her own relationship problems to help with Harvey with his conundrum. Another fire breaks out in Lois's apartment, and this time one of Harvey's associates Dinny (Will Mackenzie) rescues the Lois while Harvey saves a cat. Lois and Dinny quickly fall in love and Harvey is left to return to his wife. Written by Anonymous
Also known as: Harvey Middleman, Fireman (on a region-free DVD). 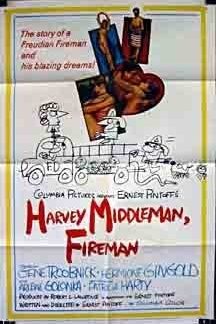